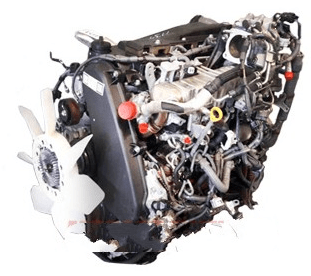 The 1KD-FTV engine has a cast iron cylinder block with 2 counter-rotating balance shafts driven by an equipment on a crankshaft. The engine block doesn’t have liners. Inside the cylinder block, there is a forged crankshaft with eight weights and 5 primary journals. The crankshaft pulley has a torsional rubber damper to minimize noise and vibration. The engine was equipped with the high-strength connecting rods and aluminum alloy pistons with resin-coated skirts. The pistons are cooled and lubed with motor oil sprayed by oil jets at the bottom of the engine block.

The aluminum 16-valve DOHC cylinder head is mounted on top of the engine block. There is a steel-laminate type head gasket in between them. The engine has a timing belt for driving the consumption camshaft just. The intake camshaft drives the exhaust camshaft by a gear.

Camshafts are covered by a plastic head cover. As was kept in mind earlier, the head has 16 valves or 4 valves per cylinder (2 intake and 2 exhaust valves). Valves are actuated by the shim-less valve strong lifters/tappets (the modification requires replacement them by brand-new). The intake valve diameter is a 32.2 mm; the exhaust valve size is a 27.8 mm. When the engine is cold, the valve clearance for the intake valves should be a 0.2-0.3 mm; for the exhaust valves – 0.35-0.45 mm.

The 1KD engine is geared up with the ‘Direct Injection 4-Stroke Common Rail Diesel Engine System’ or Toyota’s D-4D. The Common Rail system is an electronically controlled direct fuel injection system for diesel engines. The common-rail pressure varieties from 30 to 160 MPa for the 1KD-FTV engine. The fuel is injected into the cylinders by the eight-hole type injectors. The air for 3.0 D-4D engine is supplied by a variable geometry turbocharger Toyota CT16V. Limit increase is 16 Psi (1.1 Bar). The compressed air before the intake manifold goes into the air-to-air type intercooler installed on top of the engine.

All engines have an oxidation catalytic converter reduced the emissions. Begun with Euro 3 variations (European emission requirement), the engines were geared up with water-cooled EGR system (exhaust gas recirculation).

The Euro IV engine versions had the severe problem with split pistons. It generally takes place between 60-100k miles (100-150k km). That problem is defined by the existence of black smoke, strong knocking noise, high crankcase pressure and loss of power. The problem was solved by setting up reshaped pistons and brand-new oil jets in 2014.

The injectors are another source of problems. Copper seats under the common rail injectors can stop working. That concern is common for late 2004-2007 design years. The primary sign is a white smoke from the exhaust. There is a problem with injectors itself. The common rail system is sensitive to fuel quality. But even with premium fuel, the injectors can stop working around 80,000 miles (120,000 km). The engine suffered from stopped working injectors has a rough idle, high fuel consumption and loud knocking noise at cold.

The Toyota 3.0 D-4D engine can reach a 250,000 miles (400,000 km) mileage. The 1KD-FTV is not very long lasting and dependable compare to the old Toyota’s diesel engines, however we can explain that the 1KD engine is more powerful and at the same time consumes less fuel than its predecessor, the 1KZ engine.