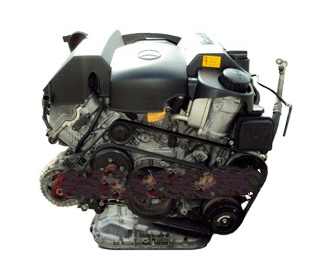 The engine is designed in V setup (the cylinder bank’s angle is 90 degrees). That is allowed to unify primarily all essential parts of the V8 M113 engine. The M112 E32 has the balancer shaft. The cylinder block is aluminum, instead of heavy but reputable cast iron. The engine has aluminum cylinder heads with one camshaft in each head (SOHC) and 3 valves per cylinder (two intake valves and one exhaust valve). Likewise, this engine was geared up with variable valve timing system, hydraulic lifters/tappets, variable geometry intake manifold and timing chain.

The next step in the development of V6 Mercedes engines became the M272 KE/DE 35 engine appeared in 2004.

1. High oil consumption. The reason for the serious oil intake is frequently the wear of valve stem seals. The next version is infected ventilation of crankcase gases.
2. Oil leaks. The powerlessness in the M112 is the seal of the oil heat exchanger.