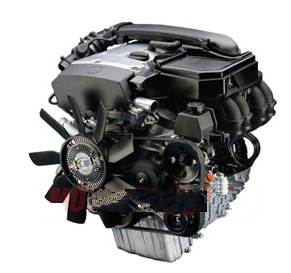 The brand-new compact cast iron cylinder block was established specifically for this engine. Also, the engine got brand-new crankshaft, linking rods, pistons, and other parts. Now there is the 16-valve aluminum cylinder head with 2 camshafts, hydraulic lifters/tappets, and electronic fuel injection. Manufacturer produced a naturally aspirated engine in addition to a supercharged engine – the M111 E20 ML (supercharger Eaton M62). The engine has the timing chain and the ECU system Bosch ME 2.1.

In 2004, the M111 series was entirely taken out from production and replaced by M271 engines.

1. Oil Leakages. This is the common problem of the 111 series. The causer is bad cylinder head gasket.
2. Loss of power, high fuel consumption. The root of evil is the air flow sensor.
3. All M111 series engines are rather noisy and featured by a short sparkplug life.