VW/Audi 1.4 TSI/TFSI EA111 Engine Specs, Problems, Reliability. The 1.4 TSI/TFSI engine belongs to the EA111 series of turbocharged gasoline engines. The engine was introduced for the very first time at Frankfurt Motor Show in 2005 as an example of displacement downsizing direction of the VW’s engine development. The main target for the small turbocharged engines was the replacement for 1.6 FSI and 2.0-liter FSI naturally aspirated engines without loosing in power and torque simultaneously offering more fuel efficiency and better emissions standards. The 1.4 TSI and 1.2 TSI engines are most common power unites for VW’s hatchbacks Golf and Polo, and also for compact sedans Jetta. 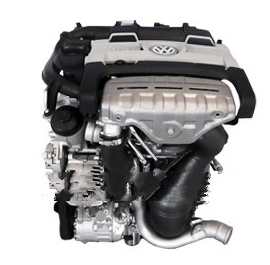 The 1.4 TSI EA111 engine has cast iron cylinder block with 82 mm (3.23 in) cylinder spacing. There is die-forged steel crankshaft on five main bearings. The engine has 16-valve (four valves per cylinder) aluminum cylinder head with intake and exhaust camshafts on top. The camshafts are driven by a roller timing chain designed for entire engine life. In reality, this chain will stretch out somewhere after 60k miles – long before the engine lifespan ends.

The crucial part of the engine is the turbocharger. There are two different versions of the 1.4 TSI. The less-powerful edition furnished with one TD02 turbocharger produced maximum boost pressure 1.8 bars (26.1 psi) and water-cooled intercooler integrated into the intake manifold. The power range for those engines is between 122-131 hp (90-96 kW). The more powerful versions have belt-driven fifth-generation Eaton Roots-type supercharger aside from KKK K03 turbocharger. That combination eliminates the turbo lag appearance and produces significantly more power and torque.

The TFSI models have VW’s Fuel Stratified Injection (FSI) system. The fuel delivery is offered by a low-pressure pump inside the fuel tank and camshaft-driven single-piston high-pressure injection pump supplied approximately 150 bars (2,180 psi) fuel pressure for the six-hole fuel injectors. The fuel is injected directly inside the combustion chamber of each cylinder. The NGK spark plugs are positioned in the center, between the intakes and exhaust valves. Each spark plug has an individual ignition coil. The engine operation is controlled by Bosch Motronic ME electronic engine control unit (ECU).

The EA111 1.4 l engine is the several time winner of the ‘International Engine of the Year’ award. Despite this fact, Volkswagen replaces this engine with a more technologically advanced 1.4 TSI of the EA211 series.