VW/Audi 1.5 TSI EA211 Engine Specs, Problems, Reliability. The 1.5 TSI is the first engine of the revived EA211 evo family introduced in 2016. It is a 1.5-liter four-cylinder direct injection, gasoline turbocharged engine with Miller-cycle combustion. It is assumed that the new 1.5-liter engine will switch the popular 1.4 TSI engine in Volkswagen Golf and other VW’s vehicles since 2017. 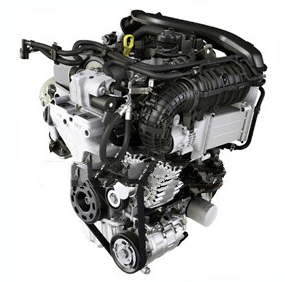 The 1.5 TSI evo is derived on further improvements to the EA211 engine. The crankcase (cylinder block) has the new concept of water jacket and is made from aluminum alloy also. The 96 kW 1.5 TSI has cast-in iron cylinder liners (sleeves), while in the 110 kW engine, the liners are coated using the atmospheric plasma spray process (APS). The engine kept the same bore of 74.5 mm. The displacement of 1.5-liter TSI has been achieved by raising the stroke from 80.0 to 85.9 mm. All-time low end got new crankshaft, the connecting rods with a finish-forged small end (they are developed without bushes), and the new cast aluminum pistons with flat piston heads. All components were developed with low friction strategy, so there are thing pistons rings, DLC coated piston pins, and etc.

The engine has an aluminum alloy cylinder head with the new shape of combustion chambers created for the more efficient combustion process. The water jacket was also modified. Like the 1.4 TSI EA211 engine, there is the integrated exhaust gas manifold (iEGM) in the cylinder head of the 1.5 TSI which also has been redesigned and optimized. There are 4 valves per cylinder (two exhaust and two intake valves); the valve angle of the exhaust and intake valves is much smaller (18.9 and 13.0 degrees) than before for the more compact combustion chamber and higher compression ratio (12.5:1). The 110 kW variant is equipped with sodium-filled exhaust valves for cooling purposes.

The 1.5 TSI has the intake and exhaust camshaft (DOHC) driven by a zero-maintenance, low-friction timing belt. The camshafts activate the valves via roller cam followers with friction-optimized grooved ball bearings on the drive end of the camshafts. The valve timing is equipped with variable valve timing system with a high-speed hydraulic camshaft actuator on the intake cam and the regular manner actuator on the exhaust cam.

Like the prior EA211 engines, the 1.5-l evo has the combination of low-temperature and high-temperature loops of the cooling system. The coolant circulation is provided due to the mechanically driven cooling pump via a toothed belt due to the intake camshaft and a modular, mechatronic coolant regulator. The 96 kW TSI evo engine has a turbocharged intake with variable turbine geometry (VTG), while the 110 kW version uses typical valve timing and a turbocharger with a mono-scroll wastegate EGT.

The 1.5 TSI is certainly more trustworthy compared to the 1.4 TSI EA111 engine. Many of common 1.4 TSI problems were eliminates in the next 1.4 TSI engine of the EA211 family. Now, the 1.5 TSI is operated on huge experience in the engineering and manufacturing of small turbocharged gasoline engines. The next major direction is optimization of systems operation by applying better but sometimes expensive solutions. There is an opinion that VW shows the limits of combustion technology. Within this case, the main problem of the 1.5 TSI engine is an expensive complexity in the background of the electric drivetrains ease in electric vehicles.