Honda D15B Engine: Specs, Problems, Reliability. The D15 is 1.5-liter four-cylinder engine of the D-series used in small vehicles such Honda Civic. The D-series also includes the D12, D13, D14, D16, D17 engines, but D15 is the best popular engine in those days. 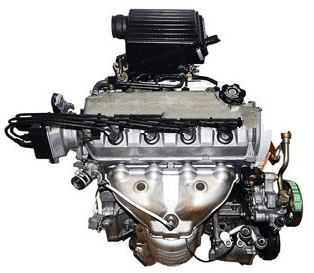 The valve train hasn’t hydraulic lifters; there are solid tappets. The valve clearance? needs in adjusting every 25,000 miles (40,000 km). Earlier versions are equipped with carburetor controlled by a computer. Then the manufacturer transferred to the single port injection called PGM-CARB, and afterwards, they set up the new multipoint fuel injection.

The engine has a long history, so the full list of alterations you can read below.

Crankshaft pulleys often break on D15B. The problem is solved depending upon how all of it happened, by replacing the pulley to replace the crankshaft.

Float engine revolutions. The issue is not standard, but it happens sometimes. The absolute most common reason is dirty throttle valve and the sensor (or valve) of idle. Cleaning from dirt will improve the situation or help, also look at the oxygen sensor (lambda probe).

Diesel sound from D15B suggests a crack in the exhaust manifold. Do not hurry to weld this crack; it will not help for a long time. Buy and save some money used or aftermarket manifold.
D15B distributors are not reliable of this engine. The engine shakes or doesn’t start whatsoever.

Despite those small troubles, the D15 is the robust and dependable engine. The engine life is more than 150,000 miles (250,000 km) with any problems. In our day is a big deal to find this engine with small mileage.