Subaru EJ20 2.0L Engine: Specs, Problems, Reliability. The Subaru EJ20 is a 2.0-liter four-cylinder, gasoline boxer engine that firstly appeared in 1989 under the hood of Subaru Legacy. This two-liter version put down the history of the EJ series. The EJ20 replaced the old EA82 1.8-liter engine and became the primary engine option for many Subaru models for a number of years. 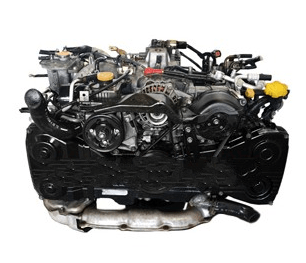 Like the ancestor, the EJ20 engine has an aluminum cylinder block with dry cast iron sleeves/liners installed inside. One of the most common version of the naturally aspirated engine, the EJ20E, has aluminum alloy cylinder heads with SOHC design (single overhead camshaft). EJ20 head features four valves per cylinder and centrally located spark plugs. The diameter of the intake valves is 36 mm, and of the exhaust valves – 32 mm.

The camshafts are driven by the crankshaft via a timing belt. The timing belt needs modifying every 60,000 miles. The EJ20E was produced in four history steps. Each generation has different power specs – 125hp, 135hp, 155hp and the last – 140 hp (at 5,600 rpm) engine used in Subaru Legacy BL. The naturally aspirated version with DOHC heads is EJ20D. This engine produces 150hp at 6,800 rpm.

They started using EJ20N names (Etc., ej201, and ej202) when Subaru started manufacturing of SOHC engines with the open-deck block design. These engines also had new SOHC cylinder heads, lightweight pistons, and an intake manifold tuned at low RPMs. The power of the EJ201 engine coincides 125 hp at 5,600 rpm. The EJ202 is a more strong version due to a light cylinder block, 4-2-1 exhaust headers, and another intake manifold. It produced 138 hp at 5,600 rpm and 138 lb-ft (187 Nm) at 4,400 rpm.

The EJ203 engine is characterized by the presence of MAF-sensor and an electronic throttle body. The EJ204 engine features double overhead camshafts and variable valve timing on the intake side (AVCS). The power of EJ204 is 155 hp (190 hp – high compression version).

The EJ series also includes other displacement versions – EJ15, EJ16, EJ25, ej18, and ej22. The 2.0 L EJ20 was replaced by the new naturally-aspirated version in the Subaru FB engine family – the FB20 engine.