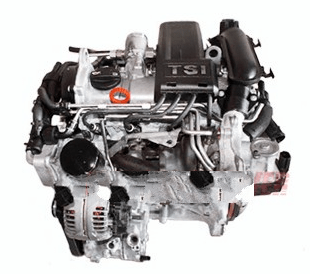 As opposed to grey cast iron engine block which the 1.4-liter version had, the 1.2 TSI/TSFI has an aluminum cylinder block with cast iron sleeves (liners). The bore size was reduced from 76.5 mm to 71.0 mm but it kept the same stroke (75.6 mm). The bottom end also received new die-forged steel crankshaft and cast aluminum alloy pistons. All moving components became lighter.

Atop the engine block there is an aluminum alloy cylinder head. It has two valves per cylinder (eight valves total) and single overhead camshaft (SOHC layout). That is a real task for small displacement engines to make them more pleasurable for a driving due to torque lacking. In this case, 2-valve heads provide more torque at low and mid-range of rpm. The intake valve diameter is the 35.5 mm; the exhaust valve diameter – 30.0 mm. The engine has a non-serviceable timing chain. The valves are actuated by roller finger cam followers with hydraulic tappets (no valve clearance adjustment needed).

The 1.2 R4 TSI/TFSI engine is 24.5 kg lighter the 1.4 l TSI, has good power and torque for a small city car. The main target (changing olden 1.6 l engines) was accomplished using modern fuel injection system combined with a turbocharged intake. In 2015, the new 1.2 TSI?? 211 engine came on the production lines, but the predecessor was being produced until 2017.

The most common issue is a stretched timing chain and timing chain tensioner failure. That can happen on a relatively small mileage – between 40,000-60,000 miles (60,000-100,000 km). The engine produces a considerable amount of vibrations – this is a normal cold engine operation! Also if you live in a cold climate it is crucial to know what the engine warms up only under a load (turn the key and drive without time for warm up the engine course it takes forever).

The engine needed high-quality fuel (95 RON ultra-low sulfur unleaded petrol (ULSP)) and engine oil. The engine reliability also depends on the driving style of owners and how timely maintenance was. The average lifespan of the 1.2 TSI engine is 150,000 miles (250,000 km).